Rifle Hunting: 7 Ways to Get Tuned Up

For many years I followed the time honored tradition among American hunters of slinging two rounds of lead down-range the day before rifle hunting, thinking this was an adequate tune-up for chasing game. While this method usually works, it’s also backfired on me at least once, and one time was all it took to force me to amend my ways. With a few hours left of daylight and the clock winding down on opening morning, I shot four or five rounds through a trusty .30-06, none of which would group under four or five inches.

Frustrated and desperate, I soon realized that two of the screws that held my scope mounts to the rifle had rusted out and fallen somewhere on the ground, never to be found again. Sure, I was able to borrow a rifle from a friend and head afield the next day, but my procrastination led to way more panic and frustration than was necessary. Since then, I follow these seven easy steps to get my gun tuned up for rifle hunting.

You wouldn’t think of taking a long road trip without at least checking fluid levels in your vehicle, nor should you jeopardize the few days each year you get to go rifle hunting by bringing an uninspected firearm into the field. Most bolt guns are actually very easy to disassemble and clean, so there’s really no excuse not to do so. After making sure the firearm is unloaded, remove the bolt. Use a simple cleaning and lubricating product, like Hoppe’s Gun Medic, to remove dirt and debris and lubricate the bolt. You’ll want to do the same with the internal components of the action. It seems basic, but I’ve actually seen small sticks lodged in the action that prevent a bolt from closing—something that would absolutely crush your moment of truth but is also easily preventable.

Finally, check the screws that hold your rifle barrel and action in the stock; usually, there’s at least one screw at the front of the magazine and behind the trigger guard. If these screws come loose in the field, and I’ve seen it happen firsthand, the barrel can and will move around in the stock, creating serious accuracy problems.

Next, take a cleaning rod or Bore Snake, paired with a lube/cleaner, and run a patch through your barrel. If the barrel is particularly dirty or you didn’t clean it after your last range session, I’d also run a brush and cleaner through it first. This will help remove major debris or copper fouling that hinder accuracy and will help prevent future rusting. A basic cleaning kit can be had for less than $30, a small price to pay to ensure you get the most out of your rifle hunting for years to come. Some folks get into copper bore cleaners that require a hazmat suit to administer, but for the shooter who puts less than 20 rounds a year through a gun, that’s probably unnecessary.

One thing I have to continually remind myself is that a trip to the range shouldn’t be rushed. Set aside a few hours or an afternoon, enjoy the process, and take your time. Familiarize yourself once again with the nuances of your rifle, from the unique way your bolt runs to the feel of your trigger. Take time to setup, enjoy the sunshine, and give your rifle plenty of rest in between shots. Not only does slowing down help you focus on proper shot mechanics, it also makes the experience more enjoyable.

4. Believe in the Bench

I’ll be the first to admit that I’ve fired my fair share of test shots from the hood of my pickup, but that’s far from ideal. If you want to get the most out of your rifle and ensure that shooter error is subtracted from the equation, it’s paramount to invest in a good bench and rest. My go-to setup is Caldwell’s BR Pivot bench ($450), which breaks down quickly and features heavy duty tripod legs and a hardwood pivoting top, and a Caldwell Lead Sled ($200) rest that helps mitigate recoil and ensure consistency in shooting. I went without these items for years, but to my own detriment.

As I mentioned earlier, I’ve had screws on my scope mounts rust and fall out, so I’m a stickler for checking screws on my optics. Once I’ve ensured the bases are fastened down securely, I’ll tighten the ring screws again. My current rifle hunting setup is a Mossberg Patriot Bantam rifle in .308 with Leupold VX-3i scope, and with the Leupold mounting system, I’ve got to take the scope off to retighten the bases. At the very least I’ll retighten the scope ring screws. Once the scope is secured, I’ll readjust the eye relief and check zero with a few shots at 100 yards.

I cringe when I see people shoot different loads from year to year without adjusting their scope or at least verifying zero. Sure, you might be shooting minute-of-deer, but that’s hardly acceptable for the sake of a shooter’s confidence or ethical hunting. Because of the physics of barrel harmonics, different loads and different sized bullets will impact at different points, sometimes with a substantial variance. So if I shot a 150-grain Hornady American Whitetail in my .308 last year, I’m going to re-check zero when I switch to the new Hornady ELD-X 178-grain load for this year’s elk season. If there is a substantial difference, I’ll adjust my scope accordingly, with my preference being 2 inches high at 100 yards.

There are many different styles of paper targets, but I’ve used Champion’s Score Keeper 100-yard rifle targets for several years now. They’re relatively inexpensive (a 12-pack is less than $5), and the 1-inch grid makes scope adjustments easy. Another option is Mossberg’s free printable targets that are offered at 25yd, 50yd, and 100yd distances, making for a quick rifle hunting practice session before going afield: 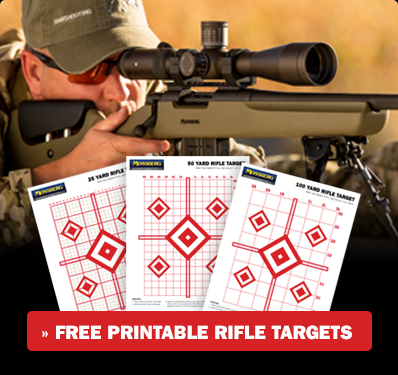 Whatever target you decide on, the important part is that you get out and practice, practice, practice. Remember, you’re not just making sure the rifle is on—you’re making sure you’re still on, too! Work on your breathing, steadiness, and smooth trigger press. Shoot a group of three shots, let the rifle rest, then do it again. Move around in the field and try shots from shooting sticks or field positions. Try to put yourself in a real-world scenario: Range a target, get in position, and make a timely shot.

Eric Conn is an avid outdoorsman, husband, father, writer and bearded gospel man. When he’s not adventuring in the wild, he writes regularly at ericconn.com and is the Editor in Chief at Gun Digest magazine.

Eric Conn is an avid outdoorsman, husband, father, writer and bearded gospel man. When he’s not adventuring in the wild, he writes regularly at ericconn.com, and is the Editor in Chief at Gun Digest magazine.
Tags: Eric Conn, Hunting Season, Rifle, Rifle Tips, Rifle Tune Up
« Return to Blog

Related Blog Posts
Article
Rifle Buck Down in New Hampshire | The Whitetail Collective
The guys head to the mountain for their annual "rutcation." The week moves slow with minimal deer sightings and long days grinding it out in the stand. On day 5…
» View
Article
Food Plots and Fertilizer: How to Prepare the Soil
Food plots have taken on a life of their own in the world of hunting. Most hunters are somewhat familiar with food plot creation these days, and companies like Mossy…
» View
Fertilizing Food Plots, Food Plot Fertilizer, Food Plots, Food Plots For Deer, Food Plots For Ducks, Jason Cruise
Article
Hunting in Canada: The Right Way
It was sunny, warm, and we were in the field late. The morning’s flight of honkers had already started and the outfitter was scrambling to set the rig just right.…
» View
930 & 935 Magnum Pro-Series Waterfowl, Hunting, Joe Genzel, Waterfowl
Continue