Is the Ultimate Turkey Gun Possible?

Is The Ultimate Turkey Gun A Myth?

Turkey guns are truly a work of art, if you ask a veteran turkey hunter that is! A real turkey hunter will tell you that a turkey gun has to be built.

Yes, you can buy a great Mossberg turkey gun out of the box, but you still will need to put together the ultimate tool for toting a bird out over your shoulder each spring.

In this turkey hunting video, Jason Cruise, producer of Mossberg’s Rugged American Hunter, covers not only the line of turkey guns manufactured by Mossberg, but his personal preference in building the ultimate gun that has proven to be his all-time favorite weapon. 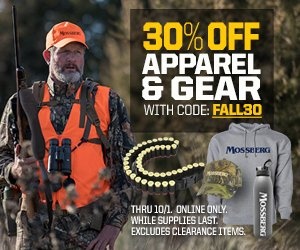 Related Blog Posts
Article
Father's Day Gift Guide
Father’s Day is right around the corner, and Mossberg is here to help! We’ve rounded up some of our favorite apparel, gear, accessories, and more to help make your Father’s…
» View
590M Mag-Fed, 930 Hunting, Father's Day, FLEX Conversion Kits, Flex Your Mossberg
Article
Duck Hunting Tips for Pre-Season
Duck openers are ticking off one-by-one, and by now I’m sure a lot of you have shot a few limits of those drab brown ducks, still waiting on the plumage…
» View
Duck Hunting, Ducks, Joe Genzel, Waterfowl
Article
Rifle Hunting: 7 Ways to Get Tuned Up
For many years I followed the time honored tradition among American hunters of slinging two rounds of lead down-range the day before rifle hunting, thinking this was an adequate tune-up…
» View
Eric Conn, Hunting Season, Rifle, Rifle Tips, Rifle Tune Up
Continue